The World After is a collaborative solarpunk TTRPG, played with a group  taking on the roles of different members of the various societies of Fain as they venture out of their Havens onto the surface world after 8000 years of isolation.

Featuring an innovative d6 system and a evolutionary Job-tree for characters, The World After reimagines the TTRPG in a decolonial antiracist and anti-capitalist framework.

A Mentor, who guides the players through this verdant but dangerous land, sets the scene and acts as other creatures and characters in Fain. The Mentor devises the scenarios, engineers how the characters meet, and then uses the game rules to help oversee how the characters interact with each other, flora and fauna they encounter, and the world around them.

A 116 page full colour book full of beautiful illustrations by Cat Rogers and Wumi 'Wumzum' Olaosebikan this is a full RPG system and great worldbuilding resource.

In order to download this game you must purchase it at or above the minimum price of $10 USD. You will get access to the following files:

Support this game at or above a special price point to receive something exclusive.

If you're in need and can't afford a copy of the game, help yourself to a community copy of the digital version. These copies have been created through sales of physical copies through Focal Point Gallery.

I originally wasn't going to buy this, thinking it was just an outdated version of lost eons. But after actually doing looking into the system I realized how wrong I was, the mechanics actually seem incredibly fun and offer a unique experience, definitely checking this one out.

The World After is a far-future, colorful man-after-man adventure rpg.

It's 120 pages, with a ton of fantastic, charming, and expressive art. The body text is a little small, but it's extremely clean and readable.

The gameworld is set long after a climate apocalypse overheated the earth, with fragments of humanity having retreated into secure Societies to ride it out; eventually evolving into radically different species before re-emerging.

World After also has fantasy elements in the form of Essence, an energy that revitalized the planet, and some great inbuilt tension via CryOrg. Essentially, Cry is the descendants of the people who escaped to the moon, and who now wish to steal Essence from the living creatures of the planet. This isn't the first place I've seen it, but it's a cool beat having the most identifiably human of the factions be the most monstrous.

CryOrg (and also the cool humans who stayed on the surface and now are giant ravenous porcupines and stuff) aren't playable, but the five species you can play all have unique and appealing aesthetics. However, because each playable species spent a *lot* of time in isolation with itself, culture and species tend to be pretty tangled up together, and this can make them feel a bit monoculture-y. Still, this doesn't effect all species equally, and there's a ton of lore for each.

Mechanics-wise, World After is a d6 pool game, with pairs of 6s counting as three successes, and with certain minimum numbers of successes serving as the difficulty on rolls. Getting an insufficient number of successes but rolling at least one 6 is a success with a complication, and this neatly bypasses the problem of there being a minimum success wall.

There's also a...sort of odd mechanic where every hour of real time you roll a stat and get a small pool of bonus dice if you succeed? It fits the lore and it's an interesting thing for a stat to do, but I have no idea at a glance if it's useful or disruptive.

Character creation starts off very simple, with each PC getting a scant few dice in each attribute, and then making skills out of attribute + attribute. Creation then gets considerably crunchier with a full class-tree system of advancement. You can't easily cross-class, and most classes have a single end-point, but you're still making 2--3 choices about which class to progress into before you hit that end. The Seer class, in particular, has five unique routes with three unique destinations, and I would have loved to see more of that for the other classes.

All individual classes come with options for  skill bonuses, extra health and Essence, as well as unique abilities. Each class also comes with a sprite in a distinct costume, giving the chapter a fun Final Fantasy Tactics vibe. Furthermore, the unique abilities all feel good, are explained simply and well, and are distinct and flavorful. I have no idea how much testing this took, but I'm seriously impressed by it.

However, here's where we get to the exp system, which feels a little weird. When you start a class, you gain the ability to buy any of its skill increases or abilities. Once you've bought out everything in the class, you can progress---either to the next class in the track, or to a completely different class if you spend more exp. Being locked into having to buy everything doesn't feel great to me, and then exp progression is kinda of loose and swingy on top of that.

Exp comes from successes on rolls. Essentially, every success you roll (so long as you actually succeed the check) is 1 exp. This means that if a player can boost a pool high enough and spam a lot of rolls, they'll end up significantly more powerful than the rest of the party. If your group is good at managing differences in PC power levels, this is a non-issue. If they're not, it's a potential problem.

The book *does* offer an alternative, and it's in upgrades per story milestone, which I think might be much better across the board. It feels perfectly stable and fits with having to buy out your class before you can proceed, and milestones work well with the more narrative focus of the game.

World After does have combat, and it has a noticeable crunch, but WA's combat flows in a weird way, so I want to take a moment to talk about that. Basically, in WA you pick one or two actions, and then you roll initiative. Your initiative is a flat roll based on how many actions you chose to take, and which actions you chose. So you might decide to just move, roll a d20, get a 1, and then someone who chose to only attack rolls a d12 and gets a 2.

On the plus side, this makes combat chaotic, and you're always adapting to the situation in front of you. On the other hand, there's a fair bit of randomness in when you act, and that feels like it might be frustrating.

Attacking is fairly simple, and is largely pool vs pool with ties going to the defender, but there's a nice meta with status effects, and if you get killed, some characters can hang around as ghosts, theoretically allowing them to continue to influence the narrative.

Magic and unique abilities are where combat is at its most interesting, and there are a lot to choose from. I suspect that in play using an ability is going to be more common than a standard attack or move action, but I didn't verify this.

As far as GM tools go, there's a detailed and well-explained bestiary included in the book. There's also a sample adventure, which surprised me a bit by not being the last thing in it.

Overall, I think World After is absolutely a game to check out if you like slightly more loose mechanics than the usual d20 fare, but you still want tactics and crunch to your combat. WA's got an extremely wild-feeling world, it feels very easy to come up with adventures that would fit in the setting, and the rules aren't hard to pick up. The classes are probably the most complex part of the system, but if the idea of class progression trees sounds like something you might like, you should definitely pick this up.

-Every page of the PDF had to load individually for me. Not sure if that's a me issue, but it isn't something I've run into with a PDF in a while.

Thank you so much, Kumada, for taking so much time with the book and your insights! Plenty of food for thought as we refine into Second edition. 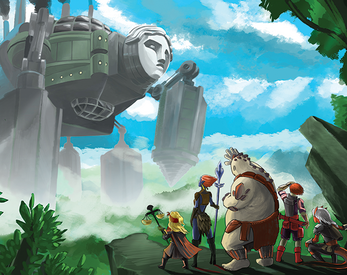